By Laren Kowalczyk on September 16, 2015 in Industry Trends, Metal

When the metal roof at Big Piney High School in Wyoming was originally installed back in the 80s, it was common to insulate buildings with phenolic insulation. Since then, it has been discovered that phenolic insulation can literally eat away metal when it comes in contact with moisture, which is exactly what was happening at Big Piney. The insulation started getting wet and corroding the metal roof, causing serious leaking issues. “The metal roof was failing because of the insulation that was used,” explained Shane Williams, project manager at Sandstrom Architecture, the design firm selected for the project. 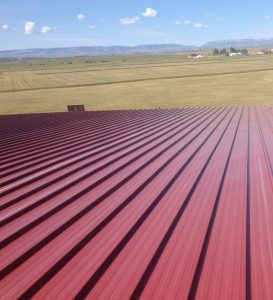 Due to the danger phenolic insulation poses to structural integrity, the district received a state-funded emergency grant to cover the cost of a complete tear-off and replacement.

Williams, who worked with local Garland representative, Logan DeWitt, proposed two viable solutions, one that included replacing the roof with a built-up system and another that recommended the use of a metal standing seam system. The district preferred the metal option due to its low life-cycle cost and proven performance. Based on the desired performance objectives, Garland’s R-Mer Span structural standing seam roof system was recommended for installation. The premium metal system is structurally sound, functionally versatile and provides superior windstorm and water penetration resistance.

Prior to the metal roof installation, a vapor retarder was installed to reduce the risk of unwanted air movement and water vapor migration through the roof assembly, which is a common concern in the area because of the major vapor drive that can occur as a result of the extreme temperature variations. New insulation was installed and the standing seam metal panel clips were then attached to wood nailers on the concrete deck. The seamless metal panels, with the longest at 125-feet long, were roll formed on site to eliminate any concern of end laps and to ensure watertight protection. DeWitt worked with Garland’s engineering services to ensure the roof system was properly designed and installed to provide optimum performance.

View all posts by Laren Kowalczyk →